Our cultural heritage is part of our narrative. It shapes our stories and connects one generation to the next. It matters and if we lose those things that define our culture we begin to lose parts of ourselves.

Nepal is rich in its diverse cultural heritage and, for visitors to Nepal it is one of the unexpected thrills of discovery. To know that the shrines, temples, charters, stupas, mani stones, and more all have a story to tell. A history to share.

The earthquakes in 2015 not only took precious human lives, they also threatened to wipe away parts of Nepal’s incredible cultural history. We applaud the efforts of international donors to help restore the treasures of the Durbar Squares in the Kathmandu Valley and know we cannot match the tens of millions of dollars those efforts will require. But we CAN make a difference.

Nepal’s cultural restoration is not just about whether the Kasthamandap in Kathmandu’s Durbar Square is rebuilt. It is about preserving the cultural life of the villages…of the communities where people live. It is about ensuring that the chortens that mark passes through the mountains or the monasteries the form the heart of the communities nestled along the slopes and in the valleys. And we have community partners who are not waiting for the government or for international donors. They are giving their labor, their energy and their small donations when they can. Small steps can have large results if we care. If we try. ”

The Partners Nepal (TPN) with whom we work on the One Day, One Tree project for reforestation of the sacred places in the mountains is also our ally in the effort to preserve the culture. The whole Khumbu region suffered terrible damage to religious structures and monuments of this region in the quakes of 2015. TPN has joined hands with affected villages to begin the work of restoration. In Namche, Khumjung, and Khunde, TPN and the local partners have, with the help of concerned donors, restored the chortens in all three locations. 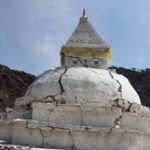 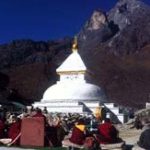 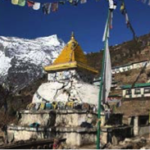 At Soarway we believe in the work of communities and we believe in the importance of preserving the culture of Nepal not only for the people but because the nation’s cultural diversity and richness drives tourism and THAT matters too. Tourism gives life to these villages, keeps the culture alive, offers jobs to youth and gives all the resources to prepare more effectively for the next disaster which we know is waiting in the wings.

Please, join us and TPN and the men and women of Solo Khumbu in making a difference. Our goal is raise $4000 to advance this cause and to help in the continued effort to restore and preserve a cultural heritage that is not only important to the people of Solo Khumbu but to the planet.

← One Day, One Tree; Help Nepal and Help the Planet From the Tarai to Khumbu: Help The Elderly Who Need Us the Most →