“I’ll Take on Math Another Day”: Ana Manciaz and the Wounded Heroes Trek of Hope 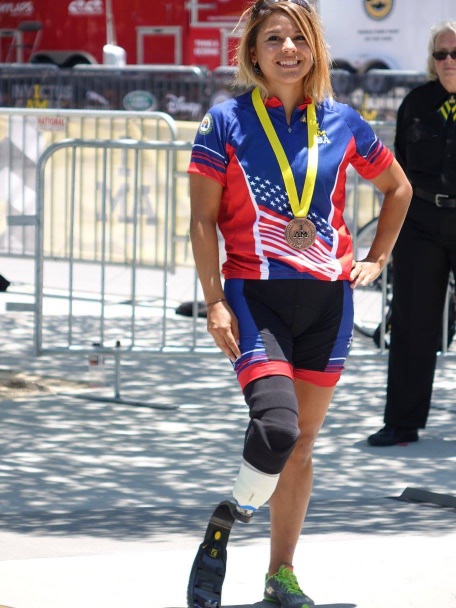 There is always something happening at Soarway and we can always use your help.  Today, I’d like to  ask  you to take a minute to read the first of a series of profiles of brave men and women who have served our country with honor and who today we’d like to serve in return.  In the process we’ll also remind folks of what Nepal has to offer those who come to share in its beauty and to meet its people and we’ll help to open the world a little wider to those with physical challenges — including the Nepalis injured in last year’s devastating quakes.

So let me tell you about Ana.  Ana Manciaz served in the US Army Military Intelligence.   Discharged as an E-5 Sergeant Ana made the choice to go back to school.  She got her BA in Psychology, and went on to study computer graphics and design.  On January 27, 2014, as Ana  was on her way to class, a truck ran a red light.  Ana, riding her motorcycle, was in it’s path.   I’ll let her tell you what happened:

“As I lay in the middle of the intersection and checked under my helmet for blood, felt over my jacket for broken bones and as a checked my last leg I thought, “Wow, I think I made it out of this ok”. It became evident I was not ok when  my leg lay at an odd angle and my jeans were soaked with blood. Upon realizing the gravity of the situation I screamed for help. Two people came to my aid, applied a tourniquet and held my hand as the pain began to build. Due to my Army training I recognized the symptoms of shock. Barely able to fill my lungs enough to speak, I asked to bring my tourniquet higher and tighter for fear of losing any more blood. I’m confident he had also served in the military because he asked if I was sure. Both of us knowing I would lose more length when it came to the amputation, I assured him yes.”

Two days later, Ana’s leg was amputated. It all seems a bit abstract when you’re just typing the words but, of course, it wasn’t   First there was the failed limb salvage surgery, then an amputation below the knee complicated by the fact that  Anadidn’t have enough skin to cover what was left of her limb.  The skin wouldn’t grow back and, after waiting weeks in the hospital, Ana’s surgical team asked her to consider amputating above the knee. Ana researched and she fought.  She considered and she fought.  And Ana held onto hope and she fought. And after a successful skin graft the recovery truly began.  My May, Ana was walking.  By March of 2015 she was running.  And last month Ana was a competitor in the Invictus Games, representing our nation once again with honor and pride as she won a bronze medal in biking and also participated in track, archery and swimming events.

Ana was fortunate.  Her saviors the day of the accident directed the ambulance to Brooke Army Medical Center and they know how to help.  Because of her fighting spirit and dedication to recovery as a veteran she was allowed to attend Center For the Intrepid, a military state of the art rehabilitation hospital.  Ana says that before her accident, the only things that scared her were math and sports  Now, thanks to  veteran non-profits she is a paratriathlete and able to surf, scuba dive, cycle, run, water ski, skeleton sled and do far more than she never would have imagined – even before the loss of her leg.

Let me again have Ana tell the rest of her story herself:  “Opportunity and peer examples  helped me achieve my goals and were the key to remaining a contributing citizen while physically challenged. I have been offered the chance participate in some highly active events like Triathlons surrounded by other people with the same injuries – who have pushed to adapt to the activity they love. I stand on the shoulders of those before me. It’s my turn to share and offer a shoulder to the people of Nepal

I have been given a gift – chance to overcome the fears I had for competitive sport and the support to redefine my capabilities both physical and spiritual. Let us together prove that our place in the community isn’t dependent on physical capability but on having the opportunity to define our passion to benefit those around us. Let’s help Nepal’s resilient people adapt to a new kind of hero.  And I’ll take on Math another day.”

We want to give folks in Nepal the chance that Ana had.  We want to create mobility resource centers, we want to build awareness, we want to change the lives for those in Nepal who, like Ana, want to find a place in their community that allows them to live lives of dignity and make a contribution.

Help us send Ana and our other intrepid trekkers to Nepal.  Help us to change lives.  Engage Nepal.